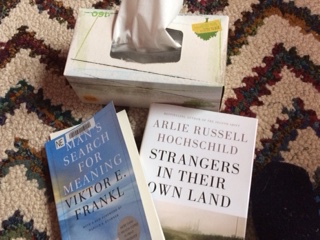 In these weeks since the election, as President-elect Trump names plutocrats to high office and makes reckless, unsubstantiated claims about millions of illegal votes, I struggle with a mild sort of despair. Perhaps that’s one reason I spent yesterday in bed with a head cold, blowing my nose and reading people who can help confront this age of division and manipulation with a measure of courage and clarity.

Viktor Frankl, the Austrian psychiatrist who spent more than three years laboring in Nazi concentration camps, was there beside the Kleenex and throat-coat tea. So was Arlie Russell Hochschild, the Berkeley sociologist who spent five years talking with Tea Party members from rural Louisiana to probe the “deep story” of anger and mourning that informs their fervent anti-government views.

Hochschild explores the deep divisions that produced this election. Frankl describes the effort and courage required to carry on when the world around you seems hopeless. Their work highlights the hard, patient work needed to understand the experience and views so different from mine, and the faith and determination required to live and work daily for my values.

First to Hochschild. In Strangers In Their Own Land, Anger and Mourning on the American Right, she probes what she calls The Great Paradox: that people struggling with economic decline and environmental devastation caused by petrochemical companies are drawn to politicians who want to slash environmental protection and further increase the political and economic power of multinational corporations.

Over countless cups of coffee and visits to homes, churches and political meetings, she found among the older, white residents of Cajun bayous and small towns a tremendous pride in family, religious faith, hard work and community. She found also confusion and grief that many of the things they most value – secure jobs that will support a family, strong communities, marriages that endure, clean water and stately trees of their beloved bayous – have disappeared during their lifetimes.

They find consolation in the healing touch and heavenward focus of their churches. They do not blame state officials who cut public education and health funding in order to subsidize multinational corporations. Neither do they blame the state for failing to hold petrochemical companies accountable for their environmental destruction. They accept that giving corporations unfettered freedom is necessary to produce good jobs, even when automation and outsourcing means that few jobs materialize.

Instead, fed by a steady diet of the alarmist spin of Fox News and talk radio, they blame the federal government, affirmative action, immigrants, Muslims and big-city liberals who dismiss them as ignorant rednecks.

The people in southern Louisiana feel grief, anger and confusion, as I do. The challenge is bridging our vast differences to find common cause. That’s the work of political parties. It’s also the work of individual writers, teachers, religious leaders, citizens to find the words, actions and means for fresh perspectives and common ground.

It seems grandiose to compare disappointment in an election to despair in a concentration camp. But there are lessons, especially the need to seize opportunities for “right action.”

Frankl says it best: “It did not really matter what we expected from life, but rather what life expected from us. We needed to stop asking about the meaning of life, and instead to think of ourselves as those who were being questioned by life – daily and hourly. Our answer must consist, not in talk and meditation, but in right action and in right conduct. Life ultimately means taking the responsibility to find the right answer to its problems and to fulfill the tasks which it constantly sets for each individual.”

This means, in part, the acceptance of suffering and attentiveness to small actions we can take to sustain hope. For Frankl, it was a camp official who slipped him a crust of bread, the chance to bolster the hope of fellow prisoners, the power to imagine life after imprisonment

“The right example was more effective than words could ever be,” he writes.

Today along with thousands of others, I will mail a postcard to Mr. Trump, asking him to remove Steven Bannon from his future White House staff. The night before Thanksgiving, I helped gather pies so that Anglo and Latino members of my church could eat and talk and support one another after a bilingual Mass. In Boston, a friend hosts a fundraiser for the resource-strapped marching band at her local high school. In a thousand small ways, we attend to what life asks of us.